Channel Islands– It was a day of remembrance and honor at the Harbor Saturday, May 7, as a large crowd of supporters, First Responders, Soldiers, Police Officers, and Firemen joined the Carry The Load Walk honoring fallen first responders and members of the Military.

THE four-mile wal­k featured beau­­ti­ful harbor views on a sunny morning, with stops at Oxnard Fire Station 6, decorated especially for the event, and proceeded up Mandalay Beach Road to the Embassy Suites Hotel, then Oxnard State Beach Park, where the walkers saw a great display of photos of fallen First Responders.

The event was run by 911 At Ease Program Director Jeff McGreevey, who retired from law enforcement after 29 years. 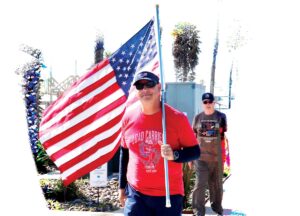 He said the walk is at a leisurely pace and will take about 90 minutes.

“It’s about 4.5 miles, and we are not competing,” McGreevey said. “I’m just so honored to see so many people who came out here to support this.”

He said the Harbor is a great partner.

“They helped us get our permit through on short notice,” he said. “I didn’t think I needed a permit to go for a walk, but they were very gracious, and we got a permit. We also got a TUP (Temporary Use Permit) from the City of Oxnard. Everybody from the county and the city have been fantastic.” 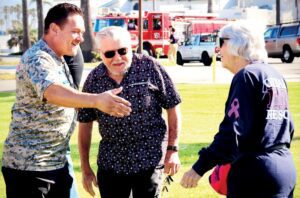 Jeffrey Lambert from the Ventura County Community Foundation said when McGreevey told him how they were honoring First Responders and the Military, he had to come and show his support.

“The Ventura County Community Foundation supports the 911 At Ease International, which provides mental health support for current First Responders, “ he said. “This an expansion of that commitment to that population.”

He said the Community Foundation has responded to disasters in the area, from the fires to the Covid-19 pandemic.

“In particular, last summer, we supported the 911 At Ease Launch in Ventura County,” he said. “We actually provided direct mental health support to those that are First Responders, including those in the healthcare industry that struggles with Covid response.” 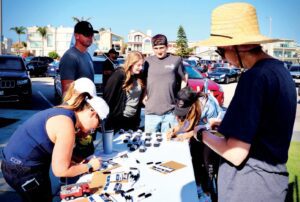 Lambert planned to set the curve with walking but said he adopted two dogs on May 7, so he might need to go home.

“Our household is a little crazy right now, but I wanted to be here at the beginning,” he said. Lambert said the Community Foundation was a great move.

“We get to help the community, our donors, and our philanthropists in Ventura County support local non-profits,” he said. “That’s what I do all day.”

Kerri Berntsen came all decked out in a Red, White, and Blue skirt and noted that her BFF is a member of 911 At Ease, and she invited her.

“I figured I’d be Patriotic, and peer pressure works really well with me,” she said. “I came from a military family, and I was a military brat. I’m wearing a red Patriotic shirt, and I have on a Red, White, and Blue tutu, I don’t have Patriotic socks on, but it all works out.”

She said the Military is near and dear to her heart, and her dad and uncle were in the Military. 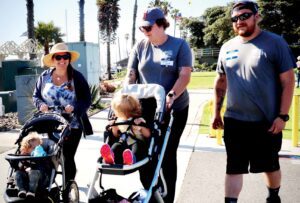 “I do know a few firemen and paramedics that are friends of mine, but the military is near and dear to my heart,” she said. “My dad was part of Desert Storm, and he was an engineer in the military for 25 years, then he was a military contractor, so he still dealt with the military once he retired.”

She said people living the military life are part of a family, everybody looked out for each other, and when the ships came home, it was a big deal.

“I survived many deployments with my dad overseas, and I understand what it’s like to be young and miss your kids and parents during the holiday,” she said. “I respect that they’ve given their lives for our freedom.”

“We are walking for fallen heroes, and I worked with Michael, her husband,” Michelle said. “Jenny wanted to do it, and I support her in all these things. We’re always here for her.” 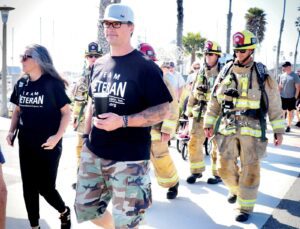 Jenny said her husband is one of the fallen officers being remembered.

“My husband, Michael Clark, was killed in 1995,” she said. “Any time there is something like this, I always want people to remember his name as well as the names of all the other fallen officers.”

“McGreevey said even if you missed the event, you can still donate and show support.

“If you go to carrytheload.org, and search for our team, 911 At Ease, we’re the only team that will populate,” he said. “You can make a donation, and it’s going to come right back to this community. What we do is pay for confidential sponsors for the First Responders and their families.” 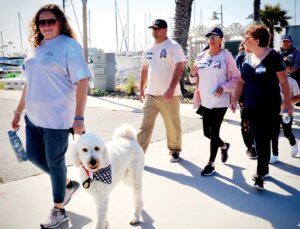