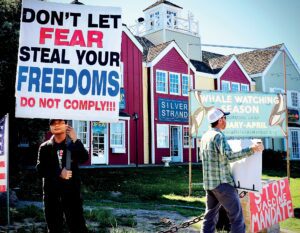 Oxnard– Residents who have grown tired of the vaccine mandate gathered on the corner of Channel Islands Boulevard and Victoria Avenue Friday, February 11, as “Feds For Medical Freedom” were out expressing their views.

Ron Severson, who works as an engineer with the Department of the Navy at Naval Base Ventura County, organized the protest.

“As Federal Employees and contractors, we are facing these unlawful mandates,” he said. “It’s due to Executive Order 14043, and we have banded together to form a group called “Feds For Medical Freedom”, and we now have become part of a coalition joining with many other entities fighting for medical freedom.”

Severson said he started informing the public because he was no longer authorized to travel.

“I go, and I work on our nation’s warships and get them ready,” he said. “I give the sailors the confidence to use our systems, and I’m being told that I am not authorized for travel.” 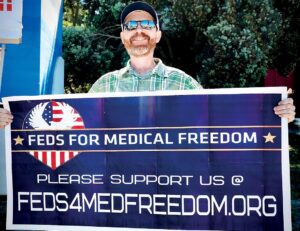 He is getting the message out to Oxnard, Port Hueneme, Ventura, Camarillo, Thousand Oaks, and further.

“I’m sharing this through social media as best I can in a polite and helpful way to correct this aberration in our government,” he said.

He said the vaccine mandate is still a part of their challenge.

“We are part of the group that’s responsible for the nationwide injunction, joining much of the executive branch from enforcing these mandates, and we are winning,” he said. “Winning is a choice we have made, and now it’s the work that we carry out to ensure winning happens, no matter the months or years necessary.”

Severson said the movement is getting a lot of support.

“People are honking, waving, smiling, and giving lots of quiet thumbs-up,” he said. “I’ve been getting the message out in San Diego, Santa Monica, Thousand Oaks, wherever I am,” he said. “There are different flavors in each region. When I was in Santa Monica, I was hit in the head by a Rainbow Flag. You know what? We’re brothers because these different groups realize that we are all being, to some degree, some more than others, are beginning to be placed under a tyrannical attitude by our executive branch.” 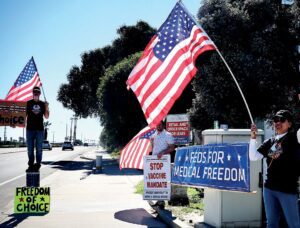 Severson loves the concept of the nation.

“Many of us are government employees, and we promote the health of our government and the readiness of our Navy,” he said. “One way or another, we work supporting our Navy in this region.”

He said the vaccine mandate that sidelines Severson ultimately hurts the ships.

“There are slowdowns in the readiness,” he said. “When someone says there is someone else who could be hired, my response to that is that it’s going to take years to get to the level of knowledge of an engineer technician who really knows their way with these systems; how they interconnect, how they operate, and, of course, the culture of the Navy and the history of what may go wrong.”

He said his tipping point came after he received an email from NAVSEA (Naval Sea Systems Command) in October.

For more information, visit feds4medfreedom.org, or join the cause at the corner of Channel Islands Boulevard and Victoria Avenue each Friday.