Oxnard– Members of the public joined the Oxnard Police and Fire departments Tuesday, August 2, at Eastwood Park, as National Night Out brought everyone together to strengthen community partnerships and learn about making Oxnard safer.

CITY of Oxnard Employees and elected officials also came out and enjoyed an evening of fun, food, and good fellowship as they spoke about issues important in the community.

“After two years of being cooped up like a hermit, it was time to get out again,” he said. “We were going to do it in 2020, and of course, Covid ended that. Normally, we do this every year.”

He did most of the food shopping, but one of his group took over at the barbeque.

“I wander around, talk to people and try to get more people involved in our Neighborhood Council,” Shulman said. “I’ve been chairman of this for 22 years.” 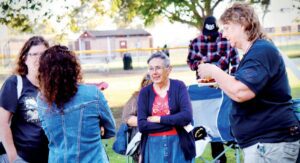 He said people who want to participate in the Carriage Square Neighborhood Council should check out nextdoor.com and see when the next meeting is being held.

“The next meeting, we hope, is going to be September 29,” he said. “We hold our meetings in the Curren School, and everybody gets involved.”

He said they put out flyers, so everyone in the neighborhood is informed.

“There are actually 1,500 households in Carriage Square, and unfortunately, a good turnout at a meeting is about 40 people,” Shulman said.

He loves the Carriage Square Neighborhood.

“It’s an older neighborhood, and people really look after their properties,” he said. “They really care and show up for events like this.”

Mayor John Zaragoza thanked Shulman for holding such a great event and inviting him to the party. 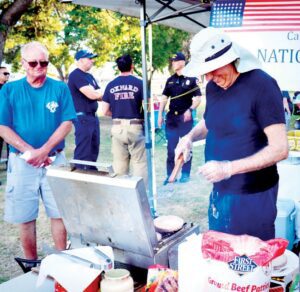 “The important thing we are doing here is the camaraderie,” Zaragoza said. “We’re making sure that we, the police officers, and the firefighters get together and meet each other. This is what we need in the community.”

He thanked the police and fire departments for bringing the community together and noted that sometimes people live close to each other and never get a chance to shake a neighbor’s hand because they are too busy.

“That happens a lot,” he said.

“I’m really excited that so many folks turned out,” he said. “I’ll definitely grab some food. River Park is having National Night Out, so maybe I’ll grab some dessert over there.”

He loves seeing everyone together but noted that all the food is his second favorite thing.

“Sometimes you get pot luck, sometimes you have grilling like you have in Carriage Square,” he said. “It’s great to come together and break bread with folks.”

He said there aren’t any Council meetings in August, but he’s still working.

“I’m looking to do some community events,” he said. “Last year, I did some conversations with a Council Member, and I’m looking to have those happen again in August. It’s going to have the same setup and partner with local businesses. This time I want to include the Neighborhood Council Chairs, and I’ve spoken to quite a few of them already.”

Police Chief Jason Benites said he loves how people take the evening to get together and interact as people, the community, and members of law enforcement.

“We have a really good turnout today,” he said. “Having done this over the years, Carriage Square always has a really good showing and continues to do just that. Len Shulman does a great job organizing this event with other people from this neighborhood.”

“Our City Manager is here; we have our mayor, mayor pro tem, and I saw at least two Council Members here,” Benites said. “It’s good to see that. It’s good to see the police being able with our community members again.”

He said it’s good to see people outside the traditional structure of City meetings.

“You can just talk to them,” he said.

“I cannot be more proud of the City I work in,” he said. “I look around, I see growth, I see happy people, new developments, and it’s a great place to live.”

He said Oxnard has a good water portfolio and is doing well with its drought mitigation efforts.

“We use different groundwater, we desalt the groundwater, and use that to minimize the amount of water we are purchasing,” he said. “That’s in jeopardy right now. It comes from the Sacramento River Delta from the state water project, and those supplies are in bad shape. We’re trying to conserve as much as possible. We’re following directives from the state on the drought as well as from Metropolitan Water.”

He noted that Oxnard’s recycled water has helped save water. 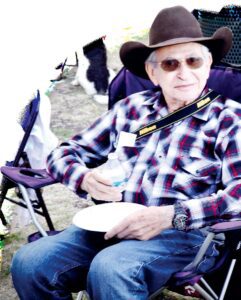